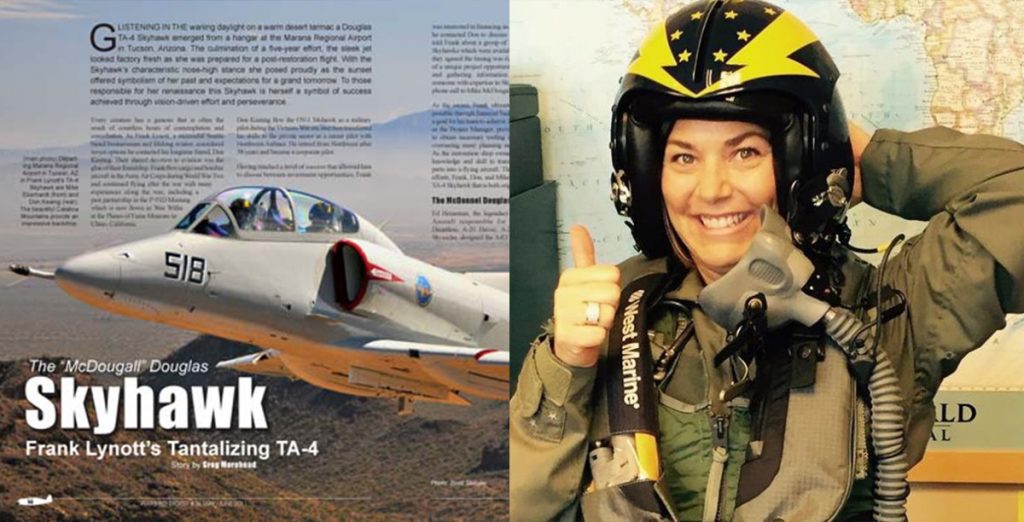 I was humbled when Vietnam pilot Don Keating invited me to join him aboard his TA-4 Skyhawk Jet when he made his final salute to his dear friend, business partner and fellow aviator Frank Lynott.(Our Papa). I was faced with a moment when I had the chance to either embrace the opportunity for a ride of a life time or be overwhelmed with fear. Thankfully, I was able to overcome my fears so that I could rocket into the deep blue sky. Thrilling as it was, it was also a ride of deep appreciation and remembrance that will never be forgotten.

He said, “I was one of Frank’s angels, so I should get to fly with him.” Naturally, this touched my heart in about a billion places. I never imagined, in my wildest dreams, that I would ever board a fighter jet, much less get to ride in one with such a special person for such a special occasion.

Don’s plan was to make two passes, a slow “fly-by” with the gears and hook down and then a “Missing Man” acrobatic maneuver. Both were enormous gestures of honor, respect and loyalty for his dear friend Frank (Papa).

The Fly-By was coordinated to take place over Ivar’s Landing Restaurant and Losvar Condominium in Mukilteo where Larry had gathered friends and family for a final toast to Frank. The gathering was a special way for Larry to respectfully honor and remember his Dad and to express his gratitude to Ivar’s staff for the kindness they gave to Papa during the last seven years. Don’s final salute made it extra special.

So, on Saturday afternoon, we boarded Don’s Vietnam era TA-4 “Skyhawk” fighter jet. This is the same Skyhawk that Papa and Don had restored together. It’s important to know that restoring the Skyhawk was not for the faint of heart. Its restoration from mothball storage in Arizona took Frank, Don and craftsman “Maj” five years to complete. The restoration resulted in an exceptional warbird and the only TA-4 fighter in existence that is privately owned.

What was so significant about this restoration project was that it gave Frank something to live for, as he would say, it “kept his prop turning” and his mind alive. I am forever grateful to Don for being
such a man of integrity. His partnership with Papa is a great example of teamwork, tenacity, and trust.

So now, maybe you can imagine just how immense this gesture of remembrance truly was. And how touched I still am to have been invited along.

If you didn’t already know it, Papa was considered part of the Ivar’s family. So much so, they kept “Frank’s table” (the one by the fireplace) open every single night for the last three years. Papa lived for this daily outing. And the truth be told, going to Ivar’s was the last thing that kept him going. Nearly every day, he was filled with the desire to go to dinner, so he would go through the discomfort of getting dressed (dapperly so, I might add) and make his way to dinner.

Dining at Ivar’s created a light and fun atmosphere for Papa. It was one of his choices that helped him maintain his autonomy. He was always full wonderful stories, laughs, silly faces, and a little bit of flirting.

This is where he became known for making his famous toast. The same toast WWI “Ace” Manfred Baron von Richthofen, (The Red Baron) made to his fellow German countrymen.
“Here’s to those who wish you well – all the rest can go to hell.”

It still makes me giggle to remember how seriously he took his toasting. I cannot begin to tell you how many times he raised his “Jack & 7” and we all mouthed those words. I’ll never forget how it made him smile and his eyes twinkle.

Today, I am hard pressed to understand how he could have managed to make such a flight back in 2011. Believe me, it’s like sitting on a rocket! The feeling of flight with this the amount of power, speed and maneuverability is difficult to explain. It was a once in a lifetime adventure. It was all beyond my wildest dreams … and no…. I didn’t get sick, but I came close. It was really hot in that cockpit.

Getting to ride in the Skyhawk was an unbelievable experience of anticipation, remembrance, new perspectives, and AWE. I got to experience the incredible sensation of 4.2 G’s, Aileron Rolls, Steep climbs, Barrel Rolls, and an Airshow Reversal even before we arrived
over Mukilteo. It was all so special.

As the Skyhawk slowed its speed approaching Ivar’s – Larry lead everyone in Frank’s favorite toast and then they all “wished him well.” While they toasted, Don tipped his wings as he passed Losvar and took a moment that only he and Papa would truly understand.

I looked out thinking how I wished I could tell Papa about this incredible ride. It would have given us hours of conversation. He would have loved to see my excitement.

Then we took another pass – this one fast so we could go into a steep climb to the heavens. It was over before I knew it, we couldn’t fly with Papa anymore. So Don made an Aileron roll, and we split off on to new adventures — just as Papa would want us to do.

Giving my farewell and making that wish to Papa, a man who gave so much to me and my family and thousands around the world, was bittersweet. I am so thankful for the last three years. I got to love, care and learn about him in ways that I would have never known. It was a miraculous gift.

Papa is one of my most favorite teachers EVER. He filled holes I didn’t know needed filling. He helped me grow into a more rounded and better person. He helped me learn to take one step at a time and soar with the winds. I will cherish the time we spent together forever.

I encourage everyone to embrace your elders — to reach out and get to know them. They have so much to share, all you need to do is be willing to listen. Many of our elders have lived through more than we could ever dream of. You can still learn from them, even in their last hours.

To live fully, you must be willing to embrace just how temporary your life is. You better believe that I will make the most out of the rest of my life…to be just like Papa. Embrace the opportunity in front of me as an adventure, face my fears, soaring on the winds of change, live life to the fullest … one step at a time.

Subscribe to our newsletter to receive free monthly tips to help you improve your health, happiness, relationships, and performance.